You are here: Home / News / Schultz cites ‘obscene amount of money’ in decision not to run (AUDIO) 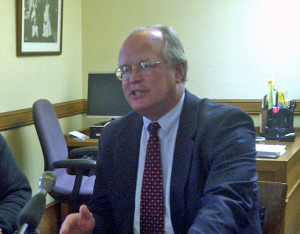 He’s been the State Senator from southwest Wisconsin since 1991. This November, he’ll be doing something else. State Senator Dale Schultz has decided to not seek reelection to his position as Senator from the 17th Senate District. That’s despite being confident that he would win another term in office. “Change is always hard for any human being. I’m certainly no different from anybody else, and I’m going to have to come to grips with that,” Schultz told WGLR.

So why is Schultz retiring from the Senate? He has no specific future plans, although he won’t rule out running for Congress again if asked. But he feels it’s a good time to leave public office, because many times politicians, like athletes, stay around one season too long. He talked about what has changed in Wisconsin politics since he was first elected to the State Assembly in 1982.

“The just obscene amount of money that has poured in, in an absolutely untransparent way into politics. It’s put good people on both sides of the aisle in a very difficult situation, where they have to decide whether they are going to go with the money which provides the discipline and the partisan structure, or they’re going to vote for their constituents,” he said. “I’ve watched my colleagues wrestle with this, and I think that’s sad.”

Schultz feels that’s changed who legislators respond to. “I always sort of thought that in a representative democracy, you were there to represent the people who elected you, not some special interest from out-of-state, or some billionaire from out-of-state,” he said. “I’ve always thought that business should have access to the public square, I just didn’t think they had the right to own it.” Schultz says he will not endorse GOP Senate candidate Howard Marklein of Spring Green for the 17th Senate District election this Fall. Schultz also says he will not endorse a Democrat candidate should someone run.