You are here: Home / Legislature / Schultz not seeking another term

A longtime Republican state lawmaker has decided not to seek reelection later this year. State Senator Dale Schultz (R-Richland Center) will end a 32 year career at the Capitol after 2014, saying in a statement that “democracy thrives when new blood is injected into the system, and it’s time for someone else to pick up the cause.” 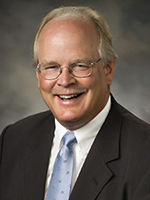 Schultz’s decision comes near the end of a term where he has often been a polarizing figure within the GOP caucus. The lawmaker from Richland Center was the only Senate Republican to vote against Governor Walker’s collective bargaining reforms. He has also drawn fire from members of his party for taking a moderate stance on several other contentious bills, including legislation overhauling iron ore mining regulations and the most recent state budget.

Schultz says he’s become “deeply frustrated and saddened” at what the Legislature has become in recent years, arguing that members want to do good but are “being coerced and convinced that the only way to accomplished that is to conform with outside pressures and agendas.” He puts much of the blame for that on the aftermath of the Citizens United Supreme Court decision, which has allowed more special interest contributions to flow to political campaigns. Schultz says the result of that is “compromise has given way to partisan conformity, and that’s not something in which I’m willing to participate.”

If Schultz had run for office again, he faced a primary challenge from Republican state Representative Howard Marklein (R-Spring Green). Democrats are also targeting his seat in the 17th Senate District, which could help them gain some ground in the Republican-controlled chamber. Schultz makes it clear that he’s not going to endorse Marklein in the primary, saying “Howard made it clear in his announcement challenging me that his top two reasons for doing so were my votes on Act 10 and mining. It’s pretty difficult to support someone who’s so out of step with the views of my constituents on major issues they care deeply about.”

Schultz began his career at the Capitol in the state Assembly, where he was first elected in 1982. He was elected to a Senate seat in 1991 in a special election, where he has served since. While he plans to leave office, Schultz says he’s not retiring from public service. “I still want to be involved, but I don’t think you have to have ‘S-E-N’ in front of your name to make a difference.” His statement does not indicate what he plans to do next though.