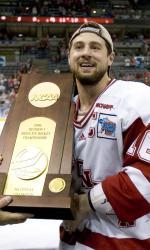 April 8, 2006. The Badgers skated onto Bradley Center ice with some much earned confidence. Wisconsin was at the end of a stellar season that included an outdoor game at Lambeau, a win against Ohio State and sweeps of North Dakota and biggest rival Minnesota, and the triple overtime game at Green Bay that sent the Badgers to the Frozen Four. All that stood in the way was Boston College.

It was a tight game. The Eagles jumped out to an early lead. But the Badgers would battle back with Robbie Earl tying the game shortly into the second. Then at 9:32 into the third quarter, senior Tom Gilbert’s goal put the Badgers back on top where they would stay, beating Boston College 2-1 and earning their sixth national title and first since 1990.

“Good teams are always going to push back and we took advantage of a power play late in the game and made it count,” said Gilbert, continuing, “I think what should be mentioned in that same breath is that there was a tremendous will. The will of that team was just as impressive as the skill.”

That year was etched into the history books for Wisconsin as the Badger women’s ice hockey team also took the 2006 NCAA Title.