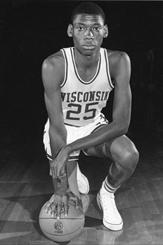 March 2, 1968. During Team Captain Joe Franklin’s final season at Wisconsin, the Purdue Boiler Makers traveled to Madison to take on the Badgers and Franklin pulled down a career high 27 rebounds in that game. It was nothing too surprising for a player who had become known for knowing exactly where the ball was going to be.

“He was the great rebounder. Joe loved that style. He was a joy to coach. He loved the game. He understood the game. He loved to rebound. He was just a player. We let him play. And it didn’t matter who he played against, he was Joe Franklin and I’ll tell ya, they had their hands full with him.”

Franklin’s rebounds helped the Badgers secure a 104-84 win over the Boilermakers. He ended his collegiate basketball career one week later having accumulated 858 boards for what is still a school record at 11.9 rebounds a game. That year, Franklin was also chosen as a first team All-Big Ten selection after securing another school record with 544 points. Franklin went on to play for the Milwaukee Bucks.