You are here: Home / Sports / Shining Moments in Badger History: OSU take down #2 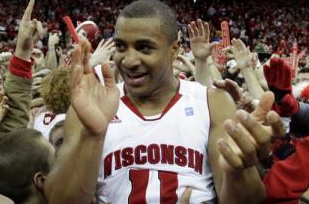 February 12, 2011. It’s something special when history repeats itself.  In 1962 the Badgers took down number one Ohio State. The victory became Wisconsin’s only win over the top ranked basketball team in school history. That is, until 2011 when once again the number one ranked Buckeyes strutted into Madison. Wisconsin took a strong lead but was down 15 early in the second half. That’s when Jordan Taylor took over scoring 27 in the game.  Taylor led the Badgers to a 71-67 victory.

Coach Bo Ryan wasn’t surprised, saying, “I just felt that Ohio State had done so many good things in a row that maybe we could have our run too. Jordan Taylor just uplifted the whole team. Then once the fans got going it was what we needed.”

The Badgers were one of only two teams that year to knock off the number one opponent in both football and basketball in the same year.