You are here: Home / News / State of the State to focus on tax cuts 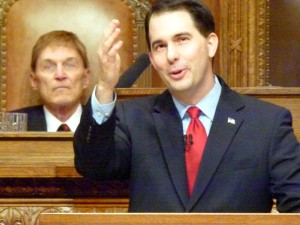 Governor Scott Walker will deliver his fourth State of the State Address tonight at the Capitol before a joint session of the Legislature. Walker’s office released excerpts of the speech Wednesday afternoon, showing that the governor plans to deliver the message that “The state of our state is strong and improving every day. The economy is dramatically better and our finances are in great shape. Still, there is more work to be done.”

The speech is expected to focus heavily on Walker’s “Blueprint for Prosperity” and how the governor plans to spend an extra $911 million in tax revenue the state is projected to have at the end of the biennium. Walker will push a plan that calls for giving it “back to the people who earned it.”

According to briefings given to major newspapers in Madison and Milwaukee on Tuesday, that plan will amount to property and income taxes cut that average $150 a year for each Wisconsinite. Walker also wants to end the practice of the state withholding too much in taxes and giving workers more money to spend each paycheck, instead of waiting for a refund at the end of the year.

You can listen to the speech steaming live on this website at 7 p.m. tonight or on your local affiliate radio station.