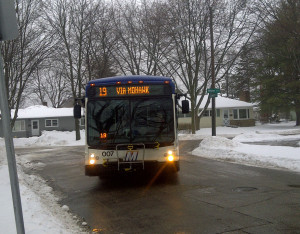 A Milwaukee gun rights organization has filed a lawsuit against the city of Madison, alleging that the gun ban policy on Madison Metro Transit buses violates state law. Wisconsin Carry Inc. claims in the lawsuit filed Wednesday that the banning of firearms from buses and bus shelters violates a provision in the state’s law allowing people to obtain licenses to carry concealed weapons.

John R. Monroe, an attorney from Georgia who has challenged city firearms policies in court in the past, is representing Wisconsin Carry, the Wisconsin State Journal reports.

The suit seeks a declaration that state law trumps Metro’s ability to ban carrying of guns on buses and at bus shelters. Madison resident Thomas Waltz, who contacted Metro in 2012 to point out what he said was a discrepancy between state law and the gun ban policy, is also a plaintiff.