You are here: Home / Brewers / Uecker plans to cut back his road schedule 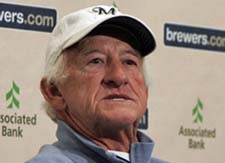 morning that he’s planning to cut back on his road broadcast schedule during the upcoming 2014 season.

Uecker said he still planned to do all of the home games at Miller Park and would only cut back on his road travel with the team.

The 80-year-old Uecker also made it clear that this is not the first step toward retirement.  Uecker has been calling Brewers games since 1971.  He said after 59 years in baseball, it’s time to “kick back and relax a little bit.”