You are here: Home / Environment / Conservation / Wachs introduces ‘Save Our Lakes’ bill 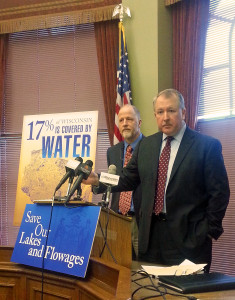 The governor signed controversial legislation into law last spring streamlining the permitting process for iron ore mining in Wisconsin, promoting job creation. Representative Dana Wachs (D-Eau Claire) says his legislation closes a loophole in that bill that he says could be devastating to Wisconsin waters. “We think it’s a hole that needs to be plugged. We think it’s a clear and present danger to the lakes in this state.”

AUDIO: The Eau Claire Democrat says his bill would protect the lakebeds in Wisconsin lakes, flowages, and reservoirs from being destroyed, drained, or filled in by mining activities. :20

Under current law, mining companies can seek authorization from the DNR to mine lakebeds near mineral deposits. Wachs says such action would negatively impact recreation, property values, and tourism revenue. The DNR is not obligated to grant a permit if the agency finds there would be significant impairment, but Wachs — a trial lawyer of 28 years — says it depends on one’s definition of “significant impairment.” He says, “You know when you see something as wishy washy as this ‘significant’ term, that’s a hole through which someone will drive a mine, in my opinion.”

AUDIO: Representative Fred Clark (D-Baraboo) is a cosponsor of the measure. He says Wisconsin water is not for sale. :13

The author of the mining bill (SB-1) disagrees with Wachs’ interpretation that mining is allowed on lakebeds and waterways.

State Senator Tom Tiffany of Hazelhurst disputes Wach’s assessment of the law. “That is not a correct interpretation,” he says. “There’s a four part test that we apply in regards to the public trust doctrine. One, you cannot impair riparian rights; you cannot impair flood flow; you cannot impair public rights for navigability purposes; and you cannot degrade water quality, and we did not change that.”

In Wisconsin about 17 percent of our surface area is covered by water. Wachs stresses, these bodies of water are critical to Wisconsin’s health, tourism economy, and sporting heritage. This bill also addresses oil and gas exploration. Wachs is hoping for bipartisan support to his proposal, but it’s unlikely it will get any action this legislative session, which ends in April.