You are here: Home / News / Another push for background checks on gun sales 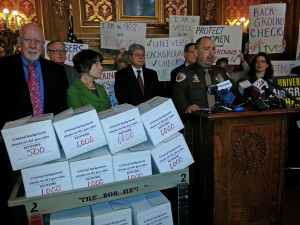 Activists push for universal background checks on the transfer of firearms in Wisconsin.

Currently, background checks are required for people who buy guns from federally-licensed dealers, but not for transactions at gun shows or the Internet. 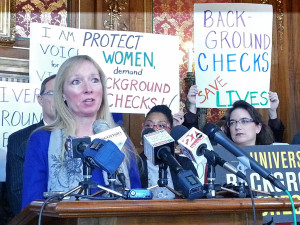 Milwaukee Democrat Evan Goyke, who sits on the Criminal Justice Committee, says people haven’t had a chance to voice their concerns. He says he has repeatedly asked the committee chairman to schedule a hearing on the bill. “Over a year I’ve asked, I’ve written, I’ve begged in person and in writing and I’ve heard no response back,” he says, “We just want a public hearing on Assembly Bill 138.” (The Senate version is SB-124)

AUDIO: Dane County Sheriff Dave Mahoney asks lawmakers from both sides of the political aisle to come together on a “common sense bipartisan bill.” 1:33