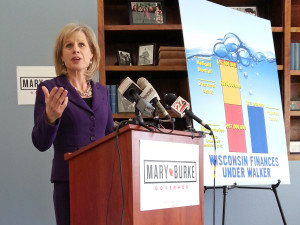 Democratic gubernatorial candidate Mary Burke stresses, the nearly $1 billion projected budget surplus is just that — a “projected” surplus, she says, based on some “pretty rosy assumptions.” Burke says Walker “is spending money we don’t have yet.”

The state Assembly on Tuesday approved Governor Walker’s proposal to cut state income and property taxes by about $504 million. Burke criticizes Walker’s plan, saying, bills have to be paid before racking up more on the credit card.

Burke explains, “Put simply, Walker’s approach is to borrow and spend. It’s left us in a weaker position financially while we continue to lag the nation in job creation.”

AUDIO: Burke says she would spend half the state’s project $977 million surplus to pay down the debt and bolster the rainy day fund. The other half, she says, would go toward property tax relief for the middle class through the “first-dollar credit,”and some money would go toward worker training. :52