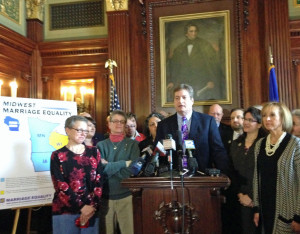 Democrats in the Wisconsin legislature want to repeal the state’s constitutional amendment banning same-sex marriage. They rolled out the effort in a press conference at the Capitol on Thursday.

“I want to begin by apologizing to the citizens of the state of Wisconsin, for the graffiti that was placed in our constitution back in 2006,” said Senator Tim Carpenter (D-Milwaukee). The amendment was approved by voters that year, after being passed by two consecutive sessions of the state legislature.

“I still remember the day in 2006, a cold, chilly November day when 59 percent of Wisconsin voters voted in a favor of a ban on marriage equality,” recalled Representative JoCasta Zamarripa (D-Milwaukee). “I still remember crying myself to sleep that night.”

Donna Winter and her partner of nearly 16 years, Liz Dannenbaum, were in the spotlight at the press conference, and were unequivocal about what they want.

“This is who I am, I cannot change it,” said Winter, a retired detective on the Madison police department. “I am here to work for the people of Wisconsin, for the GLBT people in Wisconsin. Somebody asked me ‘well have you gotten married in another state?’ No, I am going to get married in the state I am proud to live in.”

The effort to repeal the amendment would require the same steps as the effort to place it in the constitution: approval in a statewide referendum after passage by two consecutive sessions of the legislature. That would require Republican support.

“I’m hoping for a bipartisan victory in support of marriage equality,” said Zamarripa. “I’m sure the Republicans will give us a public hearing on it,” said Carpenter, who added that all Senate Democrats are already in support.

A federal lawsuit was filed last week, seeking to overturn the current amendment. Attorney General J.B. Van Hollen has already said he is ready to “vigorously defend” the ban on same-sex marriages, and Governor Scott Walker said he’s “obligated” to uphold the prohibition for as long as it’s a part of the state’s constitution.