You are here: Home / Crime / Courts / Driver in car-bike crash pleads not guilty 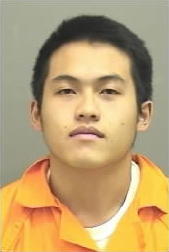 A 20-year-old Manitowoc man facing five charges in connection with a car-bike crash last month has been bound over for trial. Jamie Hang waived his right to a preliminary hearing Wednesday in Manitowoc County Circuit Court and entered not guilty pleas to all charges against him. Court records show that Hang was driving on Manitowoc’s south side the night of January 18th when he struck 56-year-old Steven Gove. The Lakeshore Chronicle deliveryman was on his 3-wheel bike after finishing his newspaper route. Gove flew through Hang’s windshield and remained stuck while hang continued driving. Gove suffered only minor injuries.

Felony charges against hang include: hit and run involving injury and first degree recklessly endangering safety. He also faces misdemeanor counts of hit-and-run, causing injury while driving with a phohibited alcohol level, and causing injury while operating a vehicle under the influence. A settlement conference is scheduled with the district attorney’s office on March 27th.