You are here: Home / Sports / Harvin comes up big in Super Bowl 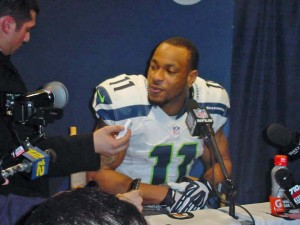 Vikings for wide receiver Percy Harvin.  Injuries sidelined Harvin for much of the season, leaving one to wonder if the Seahawks had wasted a pick.

That question was answered in last night’s 43-8 Super Bowl 48 victory over the Denver Broncos.

Harvin took the opening kickoff in the second half and went 87-yards for a touchdown.

The Seahawks signed Harvin to a six-year deal that could be worth as much as $67-million.

He had surgery to repair a partially torn hip labrum during the summer, returned for one game before the hip sidelined him again.  Harvin returned for a divisional playoff game before being sidelined with a concussion.  Sunday was his first game back.