You are here: Home / Packers / Lacy named rookie of the year

Green Bay Packers running back Eddie Lacy has been named the 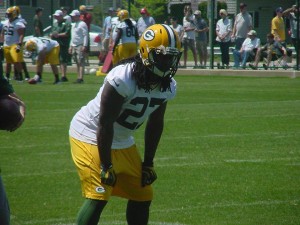 Lacy ranked No. 1 in the league among rookies and No. 8 among all players with 1,178 rushing yards this season, despite missing one full game and nearly all of another due to a concussion.

Lacy ranks No. 1 in franchise history for the most rushing yards by a rookie in a single season, number-1 in attempts (284), and tied for No. 1 for most 100-yard rushing games by a rookie with four.

Lacy received 35 votes in the rookie balloting.  San Diego WR Keenan Allen was next with 12 votes.