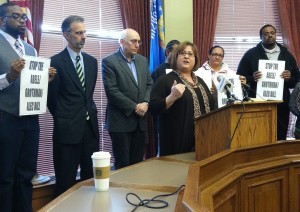 Group of leaders opposed to proposed ban on living wage ordinances speaks out at the Capitol (PHOTO: Jackie Johnson)

The legislation (AB-750) would nullify an ordinance passed just last week by the Milwaukee County Board, and ban any new ordinances. County government employees are now getting paid a minimum of 11.32 an hour — the federal poverty level for a family of four.

This measure at the state Capitol would bar all such ordinances in cases where state and federal money is involved. Madison Alderwoman Lisa Subeck is against the ban. “Madison has had a living wage ordinance on our books for 15 years, since 1999. I have to tell you it’s working. Our city hasn’t crumbled; the sky hasn’t fallen.” She says, “Madison has not only survived, but we’ve thrived.”

Those supporting a living wage ordinance say local leaders know their community better than state lawmakers do, and the living wage helps workers put that money right back into the local economy.

AUDIO: Subeck explains, it costs more to live in come parts of the state than it does in others. :35

Republican State Senator Glenn Grothman (R-West Bend), who cosponsored the bill to ban such ordinances, accuses Milwaukee County of just “taking money” from other counties around the state. “I think Milwaukee is getting too much money, but I think historically why Milwaukee claims they need more money is that they have special problems and ‘we need it to help the poor, need it to help the buses’ or whatever it may be.” Grothman adds, “Then, they do things that assure the money is not going to be spent wisely or efficiently.”

For example, he says, passing the living wage ordinance is an “advertisement … by the Milwaukee County board that they have too much money.”

AUDIO: Grothman says Milwaukee takes too much money from other counties. :47

Governor Walker was asked about the legislation. He says it’s not a part of his agenda.