You are here: Home / Packers / McCarthy optimistic about Finley’s return to the NFL 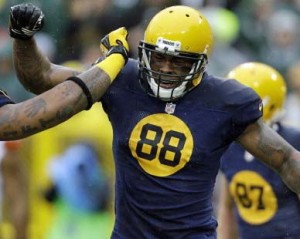 tight end Jermichael Finley’s return to football after a season-ending neck injury with the Packers this past season.

Finley’s 2-year, $14-million contract with the Packers expired at the end of the season, but McCarthy said he’s hopeful the Packers can re-sign him.

Finley suffered a bruised spinal cord during the Oct. 20 game against the Cleveland Browns.  A short time later, Finley underwent surgery to fuse the C-3 and C-4 vertebrae in his neck.

A similar surgery ended safety Nick Collins’ career with the packers in 2011 and he hasn’t played since.

According to Rob Demovsky from ESPN.com, McCarthy said Packers physician Pat McKenzie views Finley’s injury and surgery differently than he did Collins’ situation.

McCarthy said, “Pat doesn’t feel the same way about Jermichael as he felt about Nick.  No I’m very open and optimistic about Jermichael coming back.  I think the specifics of their injuries are different.”