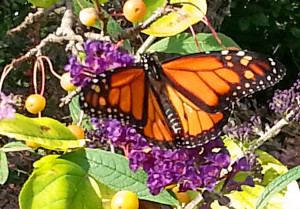 The area of forest inhabited by the overwintering monarchs is shrinking, down to 1.65 acres last month from a peak in 1996 of nearly 45 acres, according to the Mexican government and the World Wildlife Fund.

“I think the biggest one is the overwintering sites in Mexico have continued to shrink because of deforestation and the like.” Pellitteri also has another theory, citing “the changing agronomic practices” as more ground is used to plant crops. He says, “because of herbicide and everything else there is less milkweed available” and “that definitely doesn’t help.”

AUDIO: To blame the population shift on just one factor is to oversimplify the story, he says. If you’d like to help the monarch, plant some milkweed, which is the butterfly’s main food source. Better yet, nurture the little buggers in your home. The kids can learn from the metamorphosis process. 1:03

AUDIO: While small, Pellitteri says, overall Wisconsin does play a role in the monarch’s survival. Though, he believes the autumn colored butterfly deserves to be the official state insect. It’s not. That honor goes to the European honey bee. :35