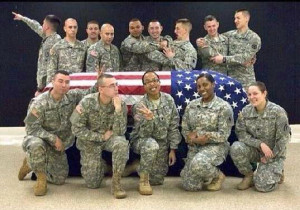 A second Wisconsin National Guard soldier has been suspended from a military funeral honors unit, over an Internet photo showing happy and smiling soldiers around a flag-draped casket.

The Guard said Wednesday that Sergeant Luis Jimenez went on social media to defend the posting of the controversial picture. As a result, he’s been relieved of his duties with the unit that helps conduct funeral services around the state for fallen troops. Jimenez remains in the Guard full-time in Madison, but with other duties.

On Tuesday, the Guard said Specialist Terry Harrison was suspended for posting the controversial photo on Instagram. Jimenez was Harrison’s task leader.

Members of other units were reported to be in the photo, which the Guard said was taken at a training site in Arkansas. The casket was empty at the time.

Maj Gen Donald Dunbar, the state’s Adjutant General, released a statement condemning the incident. Dunbar said “Military funeral honors are a sacred trust” and he deeply regrets “the pain this has caused, and personally apologize to the entire military family.”