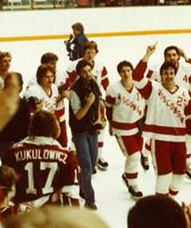 In the semifinals of the 1983 WCHA Playoffs, Wisconsin faced North Dakota in Fargo. Badger center John Johannson says it was a matchup he’ll never forget.

Neither team scored until the third period when North Dakota jumped to a quick two to nothing lead. Chris Chelios would tie the game, sending it to the first of what would eventually be three overtimes.

“It’s overtime, we win the draw to the boards.  He takes it goes around a guy, goes around Jon Casey, tucks it in. I mean it was very good hockey.”

Three weeks later, Wisconsin went on to the win the NCAA Frozen Four.