You are here: Home / Sports / Shining Moments in Badger History: Badgers become number one for the first time in school history 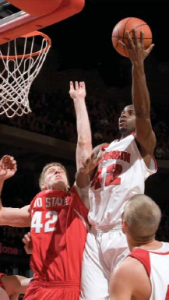 In February 2007, the Badger basketball team accomplished something no other lineup in school history had been able to do. They were ranked number one in the nation.  Coach Bo Ryan gave all the credit to his scribe.

But Coach Ryan warned his team being number on has its drawbacks saying, “You think people got ready for you when you were number two, three or four? Now watch.”

The number one ranking was just one of many accomplishments for the Badgers that season. They ended the year with a school record 30 wins, 13 Big Ten victories and Alando Tucker breaking the Badgers’ single season and career scoring record.

Tucker said, “I’m so proud of everything we’ve done, as a group, as a unit. It’s a honor to be a part of this group that has achieved, you know, what we’ve achieved.”

After holding a place in the top ten for 17 weeks that year, the Badgers made it to the NCAA tournament as the No. 2 seed, the highest in school history.