You are here: Home / Sports / Shining Moments in Badger History: contribution to the “Miracle on Ice” 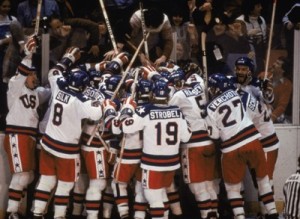 It’s known as the Miracle on Ice. It was on February 22, during the medal round of the 1980 Winter Olympics in Lake Placid, New York. Team USA skated onto the ice against Russia, who had won gold medals in six of the seven previous Olympics and was heavily favored to take home another. The young USA squad included Badgers Bob Suter and Mark Johnson.

“If you look at the story and setup of the game and what we were up against, it’s the ultimate David and Goliath situation,” said Johnson. “We trained very hard to put ourselves in a position to have success there, and now it was just a matter of executing.”

Down 3-2 in the third Mark Johnson and Mike Eruzione both scored to give Team USA the 4-3 lead, enough to seal the win and stun the world.  In what then was a round robin style of play, Team USA went on to beat Finland to secure the gold medal. Russia won silver by defeating Sweden.

Johnson says, “One of the things it was able to do was show the world that Americans can play at this level.”

The game is widely regarded as one of the greatest sports moments of the 20th century.