You are here: Home / Badgers / U.S. falls to Canada in women’s hockey preliminary 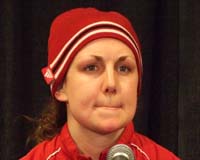 The third period was nearly all Canada.  They scored three straight goals and the American’s didn’t pick up a shot on goal until they threw one on net from center ice with 3 1/2 minutes to play.  Canada went on to win 3-2.

Canada’s second goal shouldn’t have counted.  As the puck squirted free from American goaltender Jessie Vetter, the referee blew the whistle before it crossed the goal line and television replay clearly showed that.  The official went to replay but signaled a good goal anyway to break the 1-1 tie at the time.

The Americans pulled Vetter with 2 1/2 minutes to play and it paid off.  The U.S. scored with 1:06 left to pull within 1 goal (3-2).  But despite keeping the puck in the Canadian zone, they never got a quality chance in the final minute and settled for a 3-2 loss.

Canada outshot the U.S. 31-27.  Both teams will now head to the semifinals on Monday.  If they both win, there’ll be a U.S. / Canada rematch for the Gold Medal on February 20th.