You are here: Home / News / Badgers headed to the Big Dance 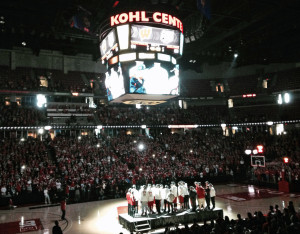 The Wisconsin Badger men’s basketball team is back in Madison with the NCAA West Regional trophy and a trip to the Final Four in Dallas. The team got a tumultuous reception from fans during a Kohl Center rally Sunday.

“This is am amazing,” said Junior guard Traevon Jackson. “I want to thank you guys for coming out here. We’re excited and we’ve just got two more to keep going, just forty more minutes, and we hope to see you guys down in Texas.”

The Badgers will face Midwest Regional champions Kentucky in their Final Four matchup, with the winner taking on either UConn or Florida for the national championship.

“You’ve supported us all year-long, we can’t thank you enough for everything you guys do for us, said Junior forward Frank Kaminsky, who scored 28 points and pulled down 11 rebounds to lead the Badgers to a 64-63 overtime victory over Arizona on Saturday. “Hopefully we’ll see you all in Texas. I heard everything’s bigger in Texas, hopefully we’ll get a bigger trophy.”

“I just wish we could take this and put it into about 100,000 pieces,” said Head Coach Bo Ryan as the Badgers hoisted the West Regional trophy. “It’s so exciting to be a mentor and to be able to work with such young men as we have up here. You can be extremely proud of them. They represent you well.”

It’s the first trip ever to the Final Four for Ryan, who’s now in his thirteenth season as Badgers head coach.