The NCAA announced qualifiers and brackets for all 10 weight classes 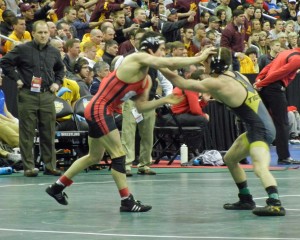 today for the 2014 Division 1 Wrestling Championships in Oklahoma City, Okla., and one Badger added an at-large bid, joining eight UW automatic qualifiers at the national tournament.

Senior Jackson Hein, a 2013 national qualifier, received one of the final four bids for the 184 lb. weight class.  Hein qualified last year after a seventh-place finish in the Big Ten Championships.  He then went on to go 1-2 at the NCAA Championships.

Redshirt freshman Ryan Taylor (17-4) earned a No. 7 seed at 125 lbs. and will face Eastern Michigan’s Jered Germaine in next Thursday’s first round action.