You are here: Home / News / Bies announces run for Secretary of State 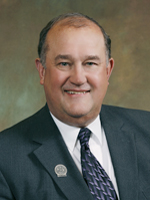 A Republican state lawmaker who is retiring from the Legislature is hoping it will not be the end of his political career. State Representative Garey Bies (R-Sister Bay) announced Thursday that he is launching a campaign for Wisconsin Secretary of State.

Bies says he believes a person is needed “who can breathe new life into this position,” and bring a “fresh and pragmatic perspective to this office.”

Democrat Doug La Follette, who has consistently held the office of Secretary of State since 1982, announced his intentions to seek reelection earlier this week. La Follette has argued he wants to see many of the duties restored to the office, after they were gradually taken away in recent years.

The Legislature backed off from a proposed constitutional amendment this session that would have done away with the office, but lawmakers have indicated they will continue to pursue the issue in the future. Bies has backed many of the previous efforts to eliminate the Secretary of State’s position, some he says he would continue to back if elected. “If in the coming years the legislature votes to give the citizens of Wisconsin the choice to do away with the office,” Bies says he “will work diligently to ensure that all responsibilities are transferred in a transparent manner with little interruption to Wisconsin citizens and businesses.”

Bies is not the only Republican planning a run for Secretary of State. Republicans Julian Bradley of La Crosse, Jay Schroeder of Neenah, and Bill Folk of Racine have also filed.