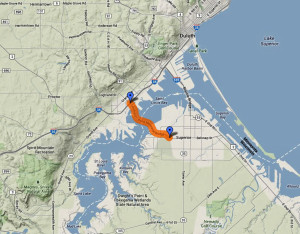 A two year construction project to make improvements on the Bong Bridge between Superior and Duluth will begin on March 31st. The Wisconsin Department of Transportation says the $18.2 million project is the most significant project on the Bong Bridge since it opened in 1984, and is expected to preserve the life of the structure for years to come.

Work will begin on the westbound lanes so Duluth bound motorists will need to use the Blatnik Bridge during the coming construction season and the eastbound lanes will be closing next year. Bridge work will include a new pavement overlay, expansion joint replacement and arch painting. In addition, work will begin on a new roundabout for the Superior approach to the bridge at Highway 2 and Belknap Street.

The project is expected to be completed in November of 2015.