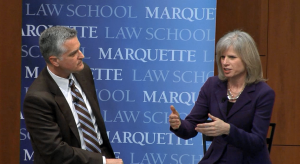 “I brought Governor Walker’s plan from 2010,” says Burke as she holds up the documents. “This is four pages. You know, I’ve seen eight grade term papers that, frankly, have more work put into ‘em.”

The former commerce secretary under Democratic Governor Jim Doyle touts a plan that would create jobs, encourage entrepreneurs, and boost higher education for a bigger part of the population.

In the one-hour forum in Milwaukee, Burke says the state has to be “more bold” and “more aggressive.” She says, “So there are things that Governor Walker is doing,” she says, “but they’re not moving the needle.”

Tom Evenson is a spokesman for Governor Walker’s campaign. In a statement, he says the governor “believes we grow our economy by getting government out of the way, letting taxpayers keep more of their hard-earned money, and investing in worker training.”

Walker campaigned in 2010 on a pledge of helping the state create 250,000 jobs during his first term in office. He’s not expected to reach that goal before the November elections. Though, Evenson says, “Over 100,000 jobs and 17,000 new businesses have been created since Governor Walker took office.”

Burke’s proposal does not include a promise for creating a specific number of jobs.

In her discussion with Gusha at Marquette Law School, Burke says, if she’s elected, she’ll start implementing her job-creation plan on “day one.”

Evenson also says the governor “believes we grow our economy by getting government out of the way, letting taxpayers keep more of their hard-earned money, and investing in worker training.”