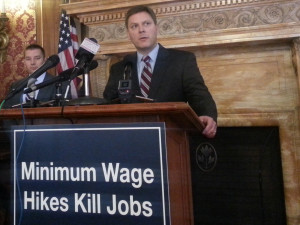 Wisconsin business leaders are pushing back against calls at the state and federal level to increase the minimum wage to $10.10 an hour. A coalition of groups is touting a recent study, which they argue show increasing the wages paid to workers would increase costs for businesses and force them to reduce the number of people they employ.

Wisconsin Manufacturers and Commerce Vice President of Government Affairs Scott Manley points to an analysis done by the Employment Policies Institute, which claims an increase in the minimum wage would result in Wisconsin losing over 27,000 jobs. Manley says “if you increase labor costs for businesses, businesses are going to respond by either cutting jobs, cutting hours, or hiring less.”

WMC, joined by the Wisconsin Grocers Association, National Federation of Independent Businesses, and the Wisconsin Restaurant Association, also pointed to recent telephone survey of Wisconsin residents. The survey found that the number of residents who support increasing the minimum wage from $7.25 to $10.10 an hour drops from 53 percent to just 39 percent, once they are told it could cost the state 27,000 jobs.

The claims made during a Capitol press conference Wednesday are drawing fire, largely because of the group behind the report. One Wisconsin Now executive director Scot Ross says the Employment Policies Institute is a conservative think tank with ties to businesses that oppose increasing the minimum wage. Ross says the report is a “corporate PR stunt” designed to distract from the fact that raising the minimum wage will help grow the state’s economy. He says bigger paychecks mean workers will have more money to spend, while also reducing the need of low wage employees to rely on government services for health care and other benefits.