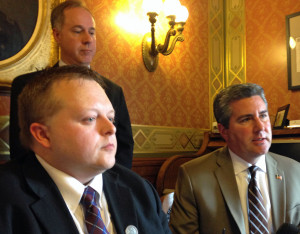 Legislation to allow access to cannabis oil in Wisconsin has cleared the Assembly. Cannabidiol is touted as a breakthrough treatment for kids suffering seizure disorders. Representative Scott Krug (R-Nekoosa) admits he was originally skeptical. “We can change our minds once in a while,” Krug said.

Sally Schaeffer is from Burlington. She and her husband Tom, think cannabidiol would be a good alternative to the drugs which have been used to treat their daughter Lydia. “We need to have another option,” she said prior to Tuesday’s vote. “A lot of parents have contacted me, and they really need this bill to move forward, to save their childrens’ lives.”

Representative Rob Kahl (D-Monona), noted that a public hearing on the measure included emotional and dramatic testimony from families with children who suffer from debilitating seizures.

“If we don’t get it through this legislative session . . . these kids have to wait until January 2015 at the earliest, and I don’t know that some of those kids that we saw come to that hearing can wait that long,” Kahl said. It’s not clear whether the Senate will approve the bill, which has yet to receive a public hearing in that chamber.

The efficacy of Cannabidiol as a medical treatment received a significant boost last year, when neurosurgeon Dr. Sanjay Gupta reversed his position on medical marijuana and documented the medical benefits of marijuana in his documentary, “WEED.”