You are here: Home / News / Changes to campaign finance laws delayed in Senate

Senate Democrats block a final vote on a couple of election-related bills.

One measure eases restrictions on campaign finance and lobbying laws. Senator Mary Lazich (R-New Berlin) made some changes to the bill, she says, in response to recommendations directly from the GAB. “Everything in here that people got really kind of … agitated about is out of the bill,” and Lazich says, “the bill is sized down to be something that isn’t what it was.”

The bill would allow lobbyists to funnel campaign contributions to political candidates earlier than they can now, because partisan primaries come earlier in the year.

Lazich says donations would not be allowed during the legislative session. “You cannot take contributions when you’re in sessions — special session, extended session, extraordinary session, etc.” 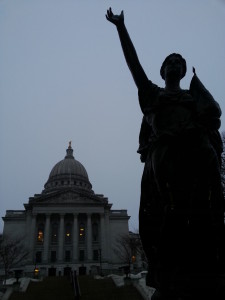 AUDIO: 22 Opponents of the bill, including Senator Jon Erpenbach (D-Middleton), say there is already too much outside money in elections.

Government watchdog groups have said this bill is being fast-tracked into law without enough time for public scrutiny.

The proposal, cosponsored by Lazich and Senate Majority Leader Scott Fitzgerald (R-Juneau), was scheduled for a hearing before the Senate’s Elections Committee last week just two days after it was introduced.

Senate Democrats used a procedural move to delay final passage of the bill. The Senate adjourned at 10:30 pm.

The chamber is scheduled to reconvene at 9:00 am. A hearing and executive session on the bill is scheduled for today, Wednesday, at 1:00 pm in the Assembly committee on Campaigns and Elections.