You are here: Home / Agriculture / Conditions dry in much of Wisconsin 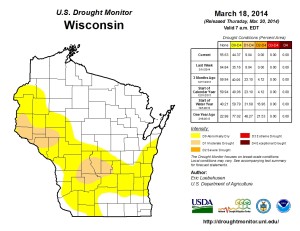 Despite a winter that featured what most people would consider to be plenty of snow, conditions in parts of Wisconsin are already dry with spring just underway. New data released this week by the U.S. Drought Monitor indicates that approximately 44% of Wisconsin – in the south, central and western portions of the state – is experiencing abnormally dry to moderate drought conditions.

“The overall drying trend was most notable across central Missouri and southeastern Wisconsin, where moderate drought and abnormal dryness were expanded,” according to the portion of the updated National Drought Summary dealing with the Midwest. Southeastern Wisconsin has received less than 50 percent of normal precipitation over the past 90 days, the report said.