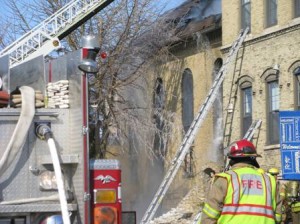 Fire destroyed a portion of the oldest building on the St. Lawrence Seminary High School in Mt. Calvary on Saturday. St. Lawrence Rector and President John Holly said no one was injured in the fire at St. Joseph Hall. No one was in the building.

Someone heard the fire alarm in the building and called 911. Mount Calvary Fire 1st Assistant Chief Greg Mueller said fighting the fire was hampered given the age of building, which dates back to the 1870s. He said it’s been remodeled a number of times with false ceilings and that made it difficult to get at the fire.

Father Holly said all 190 students were accounted for and were encouraged to call their parents and let them know they were safe. More than 40 agencies from across the area responded many of them just to supply water. Given the hilly terrain of the Mt. Calvary area getting the water up the hill was a challenge for firefighters.