You are here: Home / Brewers / Gallardo combines to shutout the Braves in opener 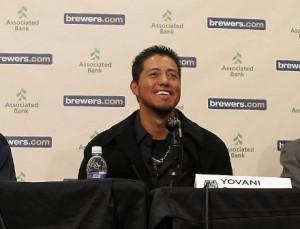 Milwaukee Brewers opened the season with a 2-0 win over the Atlanta Braves at Miller Park.

Brandon Kintzler and Will Smith followed with shutout innings in the 7th and 8th and Francisco Rodriguez came on in the 9th to earn his 305th career save.

The Brewers only runs came in the 4th inning on a Aramis Ramirez two run double down the left field line.  Ramirez, catcher Jonathan Lucroy and second baseman Scooter Gennett each had two hits for the Brewers.

The game had one replay review.  It came after Ryan Braun was ruled safe at first to lead off the sixth.  Replay showed Braun was clearly out so the Braves challenged the call and won.

Ryan Braun finished one for four, scoring a run on the Ramirez double.  A few boos during his first at bad were easily drowned out by the cheers on opening day at Miller Park.

Julio Teheran (0-1) allowed two runs and seven hits in six innings to take the loss for the Braves.

Game 2 of the three game series is tomorrow night at Miller Park.