You are here: Home / News / Governor’s conference on tourism under way 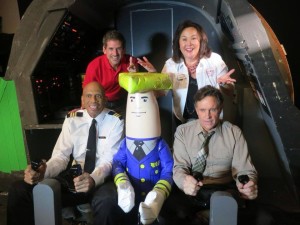 The new tourism commercial debuts at a star-studded event.

“We reunited their Airplane stars Robert Hays and Kareem Abdul-Jabbar — of course, who brought the Milwaukee Bucks to their only NBA championship — and we have reunited them in the cockpit.” Klett says, “They will be on hand Monday morning and debuting this commercial to the world.”

The ad promoting the Badger State will be posted online after its debut at the event in southeast Wisconsin. The Hollywood-style commercial will begin running on TV stations in eight Midwestern states in late April to promote the summer season in Wisconsin.

“Summer is the most advertising dollars that we spend — about $3 million in our summer buy — and that’s for TV, radio, social media, out of home, billboards, you name it,” Klett says, “The return is about $4 billion for our summer.”

A small part of the ad was filmed in Hollywood in the original cockpit from the iconic movie, but Klett says Wisconsin is definitely the star of the commercial.

The three-day networking event will attract about 1,000 local tourism officials, innkeepers, restaurateurs, and other representatives of the hospitality industry. Governor Scott Walker will discuss the state of tourism at the event, which is considered the “Super Bowl” for the tourism industry.

Summer is by far the biggest season for tourism in Wisconsin, followed by spring, fall, and then winter. Though, Klett says, this winter has been very good for the industry, especially in Bayfield County as a result of access to the ice-covered sea caves. Snowmobile trails throughout the state have also helped boost the industry. Tourism had a $16.8 billion impact on the state’s economy in 2012.

The 2014 Wisconsin Governor’s Conference on Tourism takes place in Lake Geneva at the Grand Geneva Resort from March 2-4.