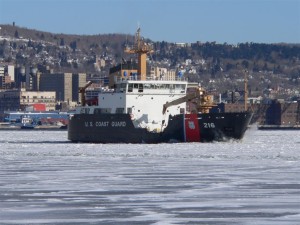 The start of the 2014 shipping season on the Great Lakes is just a couple of weeks away as the Soo Locks are set to open on March 25th. To help prepare the harbor area, the U.S. Coast Guard Cutter Alder has been making preliminary cuts through the ice, although bigger ice breakers will be needed to deal with the large amounts of ice cover on Lake Superior.

Adele Yorde with the Seaway Port Authority says that, if the ice remains as widespread later this month as it is now, ship movement may require convoys of vessels following behind an ice breaker that cuts a trail across the lake. On the bright side, Yorde says once the ice is gone, lake levels should be higher which will allow ships to carry a few extra tons in each load. Because of the severe winter she expects spring shipping this year to be slow, difficult and challenging over much of the Great Lakes system. This has been the iciest winter on the Great Lakes since 1994.