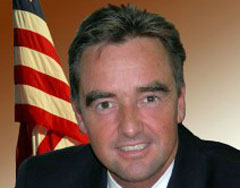 The Freedom from Religion Foundation says Green Bay Mayor Jim Schmitt has no business inviting Pope Francis to the area. The Madison-based group has told Schmitt that his recent invite to the pontiff is “grossly inappropriate.”

“I don’t know what their goal is on this,” Schmitt says. “I’m very comfortable inviting the Pope. I mean, he is the head of state and something I think would be great for our community.” Schmitt is looking for the Pope to visit the Shrine at Our Lady of Good Help in nearby Champion.

Schmitt says no tax dollars were used and defends putting the invite on official letterhead. “I thought a respectful letter on my letterhead may garner the attention of some of the people at the Vatican, and that’s why we chose this strategy.”

Schmitt says he will fully comply with the open records request made by FFRF. “The tone of that letter seemed that they were quite angry,’ Schmitt noted. “Look, we’re going to stay the course and I think it would be great for this community to have a papal visit.”

Meanwhile, an online effort invite Pope Francis to visit Green Bay has drawn more than 2,000 supporters in the first week. Schmitt created the online petition effort at the website popetogreenbay.com, and as of Wednesday afternoon the number of people signing the petition was 2,003.