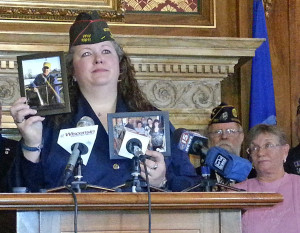 Renee Simpson, State Commander of the Wisconsin Veterans of Foreign Wars, shares her emotional story. She’s part of a family of Army veterans. Simpson says her entire family has been exposed to asbestos. (PHOTO: Jackie Johnson)

Military veterans opposed to the legislation (AB-19/SB-13) say it would “delay and deny justice to victims exposed to asbestos,” especially veterans. Jason Johns is executive director of Wisconsin Asbestos Victims Network. He says veterans make up 30 percent of all mesothelioma-related deaths, but only 8 percent of the population.

Ruth Grosz is a widow of an asbestos victim who died three years ago of mesothelioma, an aggressive cancer caused from asbestos exposure. She says he was a proud marine, devoted husband, and loving father who lived a “well-respected life and did everything right” and he deserves better.

AUDIO: Renee Simpson, State Commander of the Wisconsin Veterans of Foreign Wars, shares her emotional story. She’s part of a family of Army veterans. Simpson says her entire family has been exposed to asbestos. 3:41

Ken Rynes, State Commander of the Wisconsin American Legion, opposes asbestos-related bills that he says would have devastating effects on veterans. He says “Asbestos was prevalent in military ships, barracks and vehicles as well as many factories, shipyards and plants that veterans worked at when they returned home from serving our country.”

Governor Scott Walker hasn’t yet indicated whether he’ll sign the bill, but his spokeswoman says the bill is about “ensuring transparency in the lawsuit process to stop trial lawyers from double dipping.”

Wisconsin Civil Justice Council supports the legislation, saying the bills assure that defendants pay only their fair share of any damages they caused. The group disputes claims the bills delay justice or prevents victims from being compensated. WCJC says the proposals “would preserve money for future claimants by requiring plaintiffs’ attorneys to disclose whether they have received claims from trust funds before they sue a solvent Wisconsin business. This will help prevent trial attorneys from double-dipping.”

The state Senate passed the heavily-lobbied legislation last week. The state Assembly is expected to vote on the final version of the measure this week before lawmakers adjourn for the year.