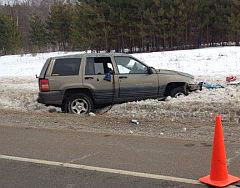 A man who led deputies on a high-speed chase across two western Wisconsin counties has been identified. Chippewa County Sheriff Jim Kowalczyk says several potential felony and misdemeanor charges are pending in both Chippewa and Rusk County against 27-year-old Jason Bremer of Ladysmith.

A call came in around 9:30 Thursday morning from the Rusk County Sheriff’s Department about a vehicle pursuit approaching the county line south of the Village of Sheldon. Rusk County deputies said the chase had reached speeds over 100 miles an hour, and that Bremer was armed and threatening to shoot himself and whoever interfered with him.

Chippewa County deputies deployed stop sticks on Highway 27 to disable the vehicle, which then turned around, went in and out of a ditch, struck a Rusk County squad car and then turned over. Bremer, who has several prior convictions stemming from traffic violations, was arrested and taken to a hospital to treat injuries.