You are here: Home / Badgers / Hockey Badgers get a top seed, will face North Dakota in NCAA Tournament

The Wisconsin Badger men’s hockey team was awarded one of four #1 seeds in the upcoming NCAA Tournament.  The Badgers 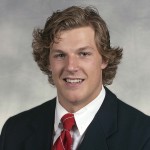 (24-10-2) are the top seed in the Midwest Region and will face former WCHA rival North Dakota in Friday’s opening round in Cincinnati.  Faceoff is set for 7pm on ESPNU.

The other half of the regional features Ferris State against Colgate.  That game will face off at 3:30pm.  The winners will meet at 5:30pm Saturday for a berth in the Frozen Four April 10-12 in Philadelphia.

The Badgers secured an automatic bid with a 5-4 overtime win over Ohio State in the Big Ten title game.  That result allowed North Dakota to land an at-large berth in the NCAA field.