You are here: Home / News / Senate takes up election bills 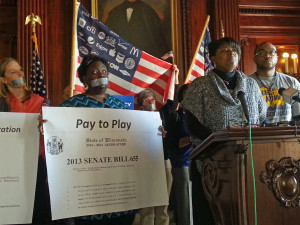 Community-based groups are speaking out against election-related bills being taken up in the state Senate today.

The Coalition to Protect Wisconsin Elections urges senators to reject the package, arguing the election-related bills would reduce voters’ access to the polls while increasing lawmakers’ access to special interest money.

Mike Wilder of Wisconsin Jobs Now says the measures are “anti-democracy bills.” At a press conference Monday, Wilder told reporters, “These bills promote pay-to-play politics, they deny folks access to the ballot, they make it harder for folks to register to vote, and they’re trying to cram it through as quickly as possible.”

One of the measures (SB-324) up for a vote include reduced in-person early voting hours; another bill (SB-655) makes various changes in the campaign finance and lobbying laws. Scott Foval, People for the American Way, says the bills are evidence of big money being placed ahead of the people’s voice.

AUDIO: Ross says this is another attempt by the GOP to gain unfair partisan advantage for themselves. :28

Republicans contend the bill is intended to bring statewide uniformity to the absentee voting process. A similar package of bills passed the Assembly last fall.