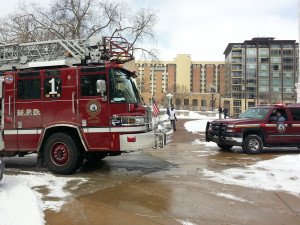 Fire crews respond to an alarm at the Capitol building. (Photo: Andrew Beckett)

A problem with a light fixture in a state Senator’s office prompted an evacuation at the state Capitol this morning.

The state Department of Administration says the fire department was called to the building at 10:38 this morning after a report of smoke in the southern wing of the building. Fire crews determined the problem was connected to a problem with the ballast of a fluorescent light fixture in an office.

A DOA spokeswoman says Facilities Management staff is working with an electrician to repair several fluorescent light fixtures that are on the same circuit.

With the usual student tour groups moving through the building and several legislative committees meeting at the time, the sudden alarm forced several hundred people out of the building. The all clear was sounded and people were allowed back inside after about 20 minutes.