St. Norbert College earned the top seeding in the West Region of the 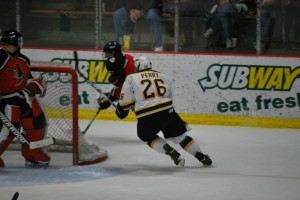 NCAA Division III Men’s Ice Hockey Tournament for the 12th time in 13 years, and will receive a first-round bye in the 11-team tournament as a result.

The top-ranked Green Knights (25-3-1) will host a national quarterfinal game at 7pm Saturday at the Cornerstone Community Center.  The Green Knights will face Adrian College (22-2-4).  The winner will advance to the NCAA Division III Frozen Four on March 21-22 at Androscoggin Bank Colisee in Lewiston, Maine.

UW-Stevens Point travels to St. Thomas in the other quarterfinal.