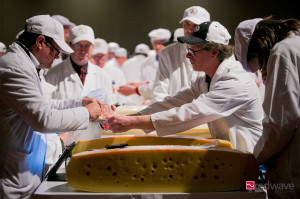 Another World Championship Cheese Contest wraps up in Madison, with a Switzerland cheese maker taking the grand prize.

Over 50,000 pounds of cheese made its way to the Monona Terrace in Madison. Fifty judges from 19 countries sampled over 2,600 entries of the dairy product.

Davide Fiori is a judge from Italy, his first contest in Madison. “It is very nice to be here, to be part of this extraordinary event.”

AUDIO: Fiori has never judged this event before, but enjoys this responsibility. :60

The winning cheese maker gets millions of dollars’ worth of publicity that he couldn’t otherwise afford, so says Wisconsin Cheese Makers Executive Director John Umhoefer. “There’s one token prize. There’s a $1,000 cash prize for the grand champion, but that’s not what they’re in it for. They’re in it to be called the World Champion Cheese Maker.” 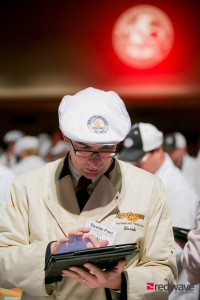 Umhoefer recalls talking to past winners and learning about their experiences, “The phone rings off the hook, from buyers, after they win this competition. When you’re named the best at something in the world, the grocery store chains around the country, the great restaurants around the country, they seek out those cheese makers, so that’s what they’re really looking for.”

Wisconsin’s representation at the event is strong. Umhoefer says about 500 of the 2,619 entries are Wisconsin cheeses. Much of the specialty cheeses made in the nation are Wisconsin made. There are 342 cheeses from the sheep and goat milk competition. Also, more women every year are judging the completion — about 6 this year out of 50.

This year’s grand prize goes to Gerard Sinnesberger and Kaserei Sinnesberger of Gams, Switzerland with their Emmentaler cheese. Their cheese scored 97.85 out of 100 in the champion round Wednesday night. Wisconsin cheese makers took 33 gold medals. See all the results.

The Wisconsin Cheese Makers Association has hosted the biennial world contest since 1957.