You are here: Home / News / Time running out for Lake Superior ice caves 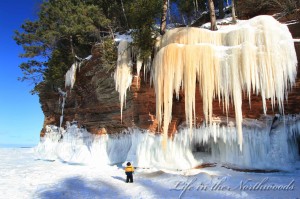 With the inevitable approach of spring and warmer temperatures, officials with the Apostle Islands National Lakeshore have announced they will be closing off public access to the popular ice caves after this coming weekend.

The ice-covered sea caves along Lake Superior have seen a surge in popularity this winter, with an estimated 124,000 visitors since they opened to the public in January. Julie Van Stappen with the National Park Service says she’s never seen anything like it before, and credits the increased interest to the ability of visitors to “get out pictures of these incredible places, quickly, to so many people” using social media.

The Park Service and its local partners made the decision to draw the season to a close because warmer temperatures could result in rapidly changing ice conditions. Van Stappen notes that current conditions around the caves are still quite safe and visitors should not have to worry about the ice becoming unstable before the end of the weekend. She says officials just want to act with caution.

The Bayfield Chamber of Commerce estimates the high number of visitors has brought a $10-12 million boost to the local economy this winter. The increased attention is also translating in to more interest in the area as a tourism destination during the summer months as well.