You are here: Home / Military / Veterans stand down against asbestos bill 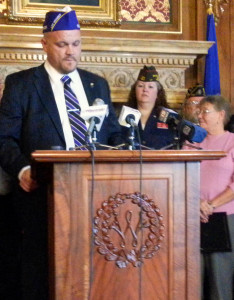 A coalition of Wisconsin military veterans groups who had been seeking to kill legislation relating to asbestos exposure lawsuits are standing down, for now.

Jason Johns is the State legislative officer with the Military Order of the Purple Heart. He represents the veterans groups who had been speaking out against asbestos legislation. Johns explains the groups — American Legion, Veterans of Foreign Wars, and Military of the Purple Heart — have not removed their opposition to this bill.

“We have not had a change of heart in regards to our extreme opposition to it,” he says, “The email I sent to veterans leadership in the state was simply a matter of we had received word from the governor’s office that we would have to agree to disagree on AB-19.”

The coalition of groups has been fighting the bill (AB-19/SB-13) since April, 2013, saying it would “delay and deny justice to victims exposed to asbestos,” especially veterans.

Johns explains, “Unfortunately, the governor is going to sign this bill no matter what; and based upon that information we, as veterans groups, decided that at this time we would stand down from any further press releases, proactive calls to the governor’s office, contact with the media, and so on.”

Proponents of the legislation argue it is necessary for transparency, disclosure, and to prevent double dipping by unscrupulous plaintiff attorneys.