You are here: Home / Business / Walker and Burke differ on jobs picture 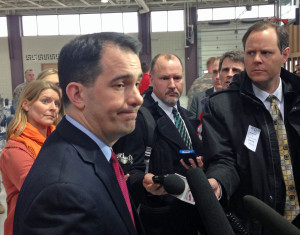 The race for governor in Wisconsin is likely to largely hinge on the state’s jobs performance, and the candidates had an opportunity to react Wednesday to a new set of numbers, with Republican incumbent Scott Walker citing them as indicative of progress, and Democrat Mary Burke saying they show the state continues to under perform on that measure.

The federal Bureau of Labor Statistics has ranked Wisconsin 35th in private-sector job growth, an improvement from 37th in the previous BLS ranking three months ago. The agency reported that the state added some 28,300 positions during the 12-month period ending in September 2013.

“It’s not good enough,” Burke said Wednesday. “We’re growing at still about half the national rate under Governor Walker, and we’re not doing what’s need to jump-start our economy. We’re lagging not only the nation but states around us.”

But Governor Walker said the state is improving when it comes to putting people back to work. “The Bureau of Labor Statistics on Monday pointed out that the drop in the unemployment rate is statistically significant,” said Walker. “So even since last September – remember we’re on a six month lag – but the drop that we saw in January is something that they made note of. I think we’re going to continue to go down that path.”

“Wisconsin is 48th in the country in terms of new businesses started,” said Burke. “We need to do a lot better, because it is new businesses and small businesses growth that account for 70 percent of job creation.”

Governor Walker noted, not for the first time, that he had to deal with a struggling economy when he took office. “We inherited a state that at its peak four years ago had 9.2% unemployment. Today it’s more three points lower. We inherited a state that had lost more than 133,000 jobs and 27,000 businesses. We’ve now turned it around to where we’ve gained more than 100,000 jobs, gained some 17,000 businesses,” Walker said.

In September 2012, the state’s Army National Guard unemployment rate of 10.1% exceeded the state and national average, while the unemployment rate for the Air Guard was 6.7%. Since then the number has been brought down, to 5.1% for the Army and Air Guard as of January 2014. “Ultimately we’d love it to be at a point where we didn’t have any level of unemployment, but having it below not only the national but the statewide average but about half of where it was two years ago is obviously incredibly good news,” Walker said.