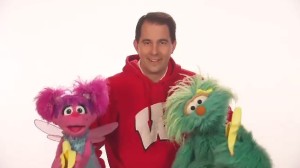 Governor Scott Walker is making some friends on Sesame Street.

The National Governor’s Association has released a series of public service announcements that feature the Wisconsin governor talking about healthy eating habits and exercise. He’s is joined in the spots by Sesame Street characters Abby Cadabby and Rosita.

The NGA says the short spots were shot during the organization’s 2014 winter meeting as a partnership with Sesame Workshop. Walker and 11 other governors, including Virginia Governor Terry McAuliffe and Oklahoma Governor Mary Fallin.