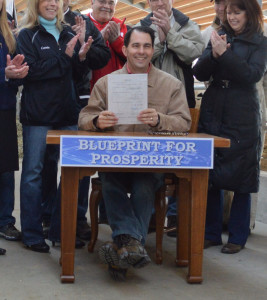 The governor signs his half billion dollar tax cut plan into law this morning at a farm in Cecil, near Shawano.

Under the so-called Blueprint for Prosperity, the state would, among other things, return $504 million to Wisconsin taxpayers over the next two years, by way of property tax cuts, income tax cuts, and reduced state income tax withholdings.

The tax cuts are a result of the state’s nearly $1 billion surplus. A typical homeowner will see a reduction of more than $100 on their next property tax bill.

In a statement following the bill signing at Horsens Homestead Farms northwest of Green Bay, Governor Walker made the following comment:

“This is a great day for the hardworking taxpayers of Wisconsin. Signing this bill means lower property taxes and lower income taxes, in addition to our withholding changes which mean more money to take home in each paycheck. This is a stark contrast to the fiscal house we inherited. Now, instead of billion dollar budget deficits, we have a surplus – and today that money is on its way to the workers, parents, seniors, property owners, veterans, job creators, and others. You deserve to keep as much of your hard-earned money as possible – because after all, it is your money. Thanks to bipartisan support of our Blueprint for Prosperity, we are moving Wisconsin forward.”

Democrats argue the money could be better spent elsewhere or saved.

The governor first outlined his tax cut plan in his 2014 State of the State address in January. Lawmakers recently passed the amended plan (SB-1) in a special session of the legislature.