You are here: Home / News / Website hopes to lure Pope to Green Bay 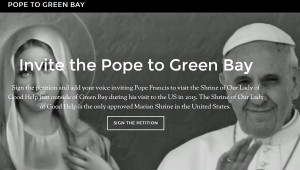 Green Bay Mayor Jim Schmitt has formally launched a website with the goal of convincing Pope Francis to visit the area in 2015. The website, popetogreenbay.com, encourages people to sign a petition asking the pope to visit Green Bay during a possible visit to the U.S. next year.

The website specifically requests Pope Francis visit the Shrine of Our Lady of Good Help in Champion. In 2010, the Catholic Church validated a 19th Century appearance at the shrine by the Virgin Mary. Schmitt has also said he hopes the pope would consider holding a mass at Lambeau Field.

Pope Francis is expected to visit the U.S. in September 2015 for the World Meeting of Families, an international Catholic gathering held every three years. The event is being held in Philadelphia.